It’s winter, it’s cold in my city, the pond is frozen over, but there are geese here. Are they just lazy? What gives?

They’re not lazy, they live here.

There are two groups (different populations of the same species) of Canada geese. Migratory geese fly thousands of miles seasonally, heading south for warmer climates. Resident geese usually live in more temperate climates. They stay in their home range throughout the year, flying a maximum of a few hundred miles to find open water, food, and a safe place to molt. Both resident and migratory geese return to their birthplace in late spring to breed and nest.

Resident geese flocks are descendants of captive geese captured by hunters in the early 1900s. Hunters used captive grounded geese as live decoys, or bait, to lure a wild flock to land within hunting range. Geese flying overhead would see and hear the decoy birds (geese that honked loudly were prized for this reason) and assume the landing site was safe. The federal government outlawed several foul hunting practices in 1935, partially due to a rising awareness of endangered waterfowl. Among the outlawed practices was the use of live decoy birds. As a result, many hunters chose to release their captive flocks.

An estimated 40,000 resident Canada geese are comfortable living in Massachusetts year round. Resident geese living in Massachusetts can be tracked back to “around 8,500 captive geese being kept as decoys…” said H. Heussmann, a Waterfowl Biologist at MassWildlife.  After several generations in captivity these geese lost the instinct to migrate, and were dependent on humans for food. Human intervention forced them into a new lifestyle of year-round comfort and accessible food.

Many communities welcomed the newly freed geese, which at that time were exotic and a symbol of wildlife. The geese settled into urban and rural environments across America. Nationally, current estimates show resident geese outnumbering migratory geese by 3 to 1. Resident geese populations have exploded within the last decade, making resident geese a nuisance more than a novelty. We can thank our fore-bearers for our current noisy, fat, neighborhood resident geese. 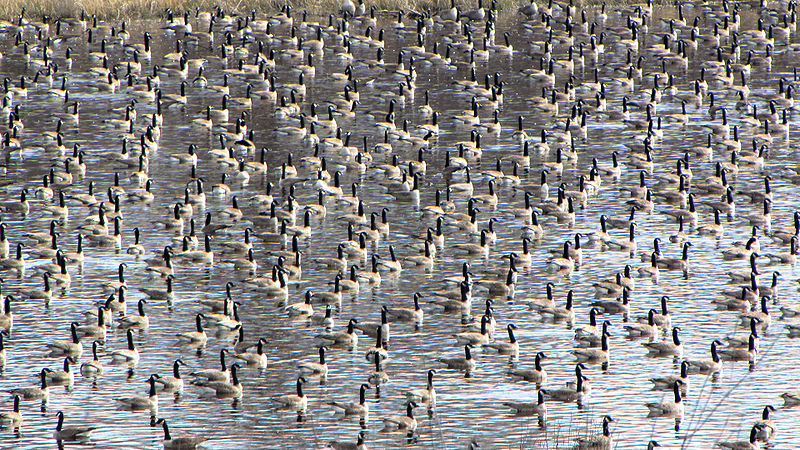 Other places to find me and my writing